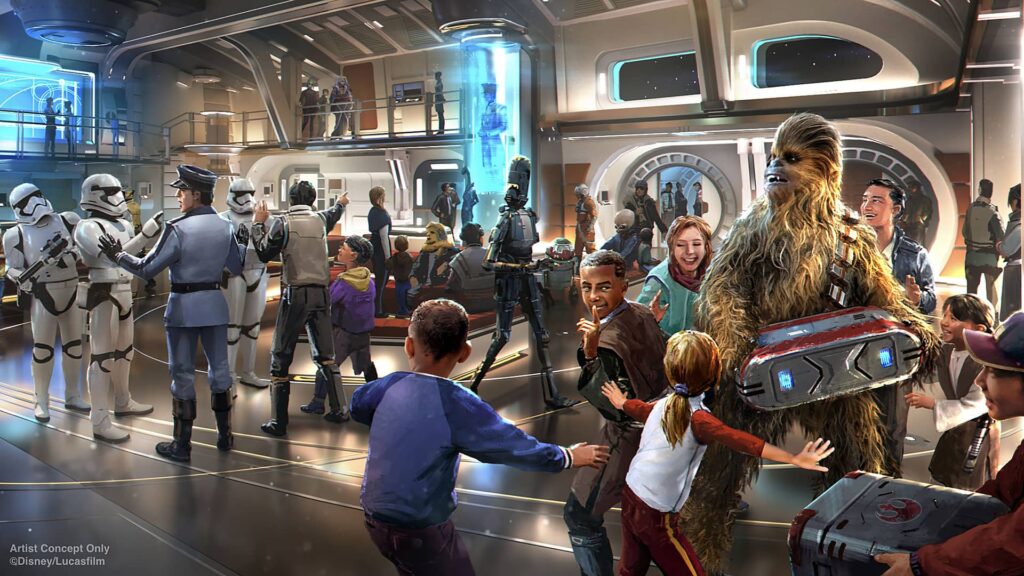 When the theme park gates close for the night in 2022, though, Star Wars fans won’t have to leave the galaxy far, far away. Instead, they can have a two-night trip at Walt Disney World onboard the Star Wars: Galactic Starcruiser!

Disney revealed new jaw-dropping technology for the Starcruiser on May the 4th this year, and now, ahead of its 2022 premiere, Disney has shared a poster of the experience and more about what fans may expect.

The Star Wars: Galactic Starcruiser, according to the Disney Parks Blog, will allow fans to experience “a new kind of ‘storyliving'” as they “travel the galaxy in a finely appointed starship” known as the Halcyon.

Guests may live out their own Star Wars journey for two nights in a resort that resembles a Star Wars starship sailing across a galaxy far, far away.

The upper-left corner of the poster shows the ship in all of its glory, revealing that the Halcyon is “known for its impeccable service, fabulous entertainment and exquisite dining, all of which you’ll get to enjoy during your vacation.”

Disney also shared that guests will be able to experience an “otherworldy” multi-course meal at its Crown of Corellia Dining Room with the entertainment provided by a Twi’lek superstar.

The four individuals on the poster are “meant to represent you, the travelers,” where you’ll be able to forge your own experience that is tailored to “your choices.”

“Do you want to support the First Order? Live like a Jedi in training? Or perhaps become a member of high galactic society? It’s all waiting there for you to discover and decide.”

One portion of the poster hints at lightsaber training which will likely include Disney Imagineering’s new lightsaber tech that was revealed earlier this year.

The astromech shown in the artwork is said to include ” a few extra bells and whistles.”

However, what’s even more apparent is the presence of Kylo Ren and his stormtroopers as well as fan-favorite Chewbacca!

“The Halcyon starcruiser does have a storied past, after all, and a reputation for finding itself in the middle of galactic conflicts. Luckily Chewbacca and his trusty bowcaster are there in the upper-right corner. Remember, it’s not wise to upset a Wookiee!”

Finally, the bottom of the poster depicts the rocky spires of the Black Spire Outpost of Batuu or Star Wars: Galaxy’s Edge. Guests on the Star Wars: Galactic Starcruiser will reportedly spend their two-day trip also visiting this planet on the far side of the galaxy.

The first trip aboard the Halcyon launches in 2022!