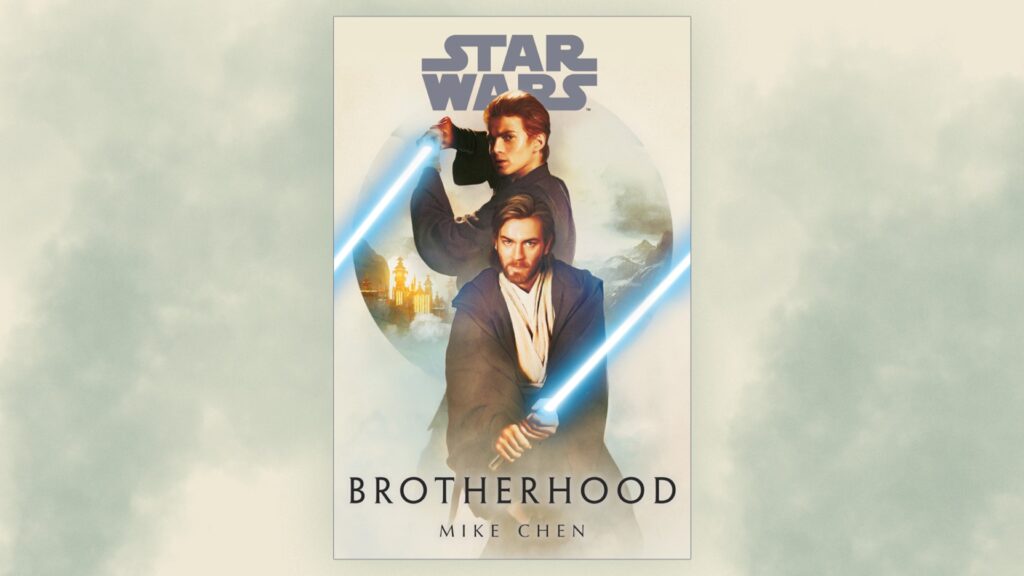 As enemies, it seems that Obi-Wan Kenobi and Asajj Ventress have always had an awkward relationship.

In the first excerpt from Mike Chen’s upcoming Star Wars novel, Brotherhood, we get a glimpse of the formation of Kenobi and Ventress’ bond as both enemy and ally.

Arriving this May, fans will be able to explore the adventures that seemingly bring the Nightsister and Jedi Knight together.

Check out the excerpt below, courtesy of StarWars.com:

“This is interesting,” the woman said. She stood up, her cloak flowing back down to rest, and she presented the device in front of the gathered Neimoidians. “I’ve never seen such elaborate plating on a scanning device.”

“It was custom. A gift from a friend. Consider it,” Obi-Wan said, “a bit of a lucky charm.”

She tapped a finger against the underside where the alloy case attached before coming back to Obi-Wan, holding it up as they met face-to-face. “It’s very pretty. I didn’t know Jedi cared for such flamboyant things.”

“A sentimental Jedi.” The woman smiled, the harsh lines of her tattooed face bending in unnatural ways. “I think we’ll be friends.”

“Perhaps you can have it when I’m done with my investigation.”

“It would be a lovely accessory. And look, it’s even my color.” She put the device back into the crate, then clamped the lid shut. “The Jedi is clean,” she announced, her long cloak whipping out to reveal a hint of a skirt underneath as she turned on her heel.

“Come, emissary,” said Minister Eyam. “We will send your belongings to your quarters. This shuttle” — he gestured to a small transport craft on a connected smaller platform, one likely used for city-to-city vehicles—“will take us to the disaster area.”

They walked in silence, though Obi-Wan noticed the mystery woman matched his exact pace stride for stride. “I’m sorry,” Obi-Wan said, “I didn’t catch your name.”

“Ventress,” she said. “Asajj Ventress. A pleasure to finally meet a Jedi. Count Dooku speaks so highly of your Order.”

They started with the formalities — a basic tour of the government offices and the most notable landmarks of Zarra: the brightly lit mix of business and artistry, from the hanging towers below the capital’s biggest stone archway to the open-air Grand Theatre of Judgment where trials and debates took place. The cityscape looked truly gilded from the air, designs and architecture unique to the culture and unlike anything else Obi-Wan had seen in his journeys across the Republic—elegant and sophisticated in ways far different than, say, Naboo, while still taking advantage of the planet’s unique natural wonders, structures jutting out in directions simply impossible elsewhere. The tour itself was short-lived, and soon they soared through the rolling fog of Cato Neimoidia, a long descent that revealed just how high up the rocky spires of this world were. Though he had watched holos showcasing the topography of the planet, none of it did justice to the overwhelming girth—no wonder they had the ability to anchor entire cities.

“It’s quite majestic, isn’t it? Have you ever seen anything like it?” Obi-Wan said, a strategic question to goad the mysterious Ventress into revealing more about herself.

“I have not either. I’ve traveled to planets with all forms of environmental oddities but nothing quite like this.”

She shook her head with a breath, then straightened up. “Let’s dispense with the pleasantries. You wish to ask me something, Kenobi?”

Her direct line of questioning caught Obi-Wan’s diplomatic sensibilities off guard. Perhaps that was by design, given her demeanor. “I’m trying to be polite.” Obi-Wan tilted forward in his seat. Around them, the Neimoidians remained silent, though he was certain they listened. “Unless you feel you have something to hide. Something,” Obi-Wan said, suddenly all of that experience strategically arguing with Anakin proving fruitful, “that makes you untrustworthy?”

Ventress’s head tilted as she bit her bottom lip, a huff of amusement coming out just enough for Obi-Wan to hear. In fact, the other passengers may have missed it. “While my Master has great respect for your Order, he also understands that it is the political tool of the Republic. If you recall”—she gave a knowing nod—“that is one of the reasons he left it.”

She referred to Dooku as “Master.” Was that an intentional representation of hierarchy within the Separatist leadership? Or a slip revealing something further?

“Because of that, he has sent me to oversee your investigation and interactions with the Neimoidians—” She sucked in a breath, holding it as if to tease him. “—to ensure that there is no evidence of corruption.” Her eyes locked with his, a menacing leer that felt as much a dare as a threat.

Fortunately, Obi-Wan had dealt with worse. He did, after all, see Anakin through some very turbulent teenage years. “Well then,” he responded with a tense calm, presenting an equally lengthy pause. Then his tone retreated, going back to the standard diplomat’s voice as if he were simply talking to another politician on Coruscant. “I look forward to working with you,” he added, putting his hand out to shake, “in good faith.”

She looked at his outstretched hand, then back up to read his face. He responded in kind with a polite smile and waited without any movement, like an AI holo awaiting input before animating its canned response. “Likewise,” she finally said, taking his hand.

The damage was worse than Obi-Wan had expected. They started with an aerial view, constantly circling as the Neimoidian inspector explained the disaster simulation they’d created to get a sense of how the entire structure fell: speed, angle, tilt, how fires from the initial explosions spread to other areas, the way those fires then weakened other structures prior to impact. And though Ventress presented a cold and unmoving front, he noticed that the air shifted around her when the inspector described the way bodies were flung out from the structure during its nosedive to the planet’s surface—and, in very pragmatic terms, when he described the radius around the structure in which corpses had so far been recovered.

And that was just the first pass.

The closer they got, the more unsettling the visuals were, from the still-smoking fires to the imploded buildings, the crumbled remains of their gold plating reflecting the licks of flames. “By estimates, we have recovered about a third of the bodies so far.”

“Were there any survivors?”

“Yes. Luck was on their side. Our analysis team wants to discuss their circumstances with them to see if they can identify a pattern, some type of safety parameter we can build into our infrastructure.” He looked down, his green skin turning more ashen as his eyes closed. “But most of them refuse to talk about it.”

The flight paused, hovering in midair. Ventress took out a scope, then stood by the cockpit. “There it is,” she said. “Come here, Kenobi.”

“What is it?” She handed over the scope and pointed at an angle off the flight path. Obi-Wan brought the scope to his eyes, the target area already highlighted in a bright-green box within the display. The scope zoomed in, its internal computer interpolating details about the damage so fast that Obi-Wan couldn’t digest it all. But the visual highlight was enough. This clearly was the remains of a strut built to secure the city block between spires, a charred burst indicating the center of an explosion.

“The blast points,” she said, and as if by design, five further green boxes lit up, each framing clear burn marks. “How many do you count?”

“Six.” Six blast points, each precisely laid out with exact spacing and angles to one another, probably calculated by computer. The destruction on the shredded end of the massive strut blanketed over a lot of the finer evidence, but Obi-Wan had seen enough in his time—including his few weeks being around the clones—to understand that Ventress was right. And bounty hunters, pirates, mercenaries—while it remained possible that they could do something like this, the odds of that felt low, especially after Dex’s report.

“Six blast points, distributed specifically to maximize damage given the load on the strut. I would consider this military precision. Wouldn’t you?”

“Perhaps,” Obi-Wan said, one eye on Eyam in the front of the craft. “Droids can be precise as well.”

“That they can. Such an astute observation. I can see why they call you a Master.” She turned to Eyam as well. “And this is just a single strut. Who knows what we’ll find elsewhere?”

Though an exhale of frustration fought to come out, Obi-Wan caught it, and instead offered the scope to Ventress in a controlled gesture. “This certainly requires more investigation.”

“Indeed.” She took the scope back with a harsh tug that pulled on his fingers.

“If there are no objections,” Eyam said, “I would like to land and show you the destruction on the surface level.”

“Please do. It is imperative that I see the entire range of destruction before I start my investigation. I promise I will get to the bottom of this.” The shuttle chair creaked as Obi-Wan shifted in his seat to look directly at Ventress. “Perhaps through mutual cooperation, we can find some common ground between our governments.”

“Cooperation?” Ventress settled back into her chair, legs crossed and arms folded. Light from outside reflected in the shuttle’s cramped quarters, and Obi-Wan caught a glint of metallic reflection by her hip before she adjusted her cloak. “Certainly. If you can win me over.”

Star Wars: Brotherhood is currently available for pre-order before it arrives on May 10.