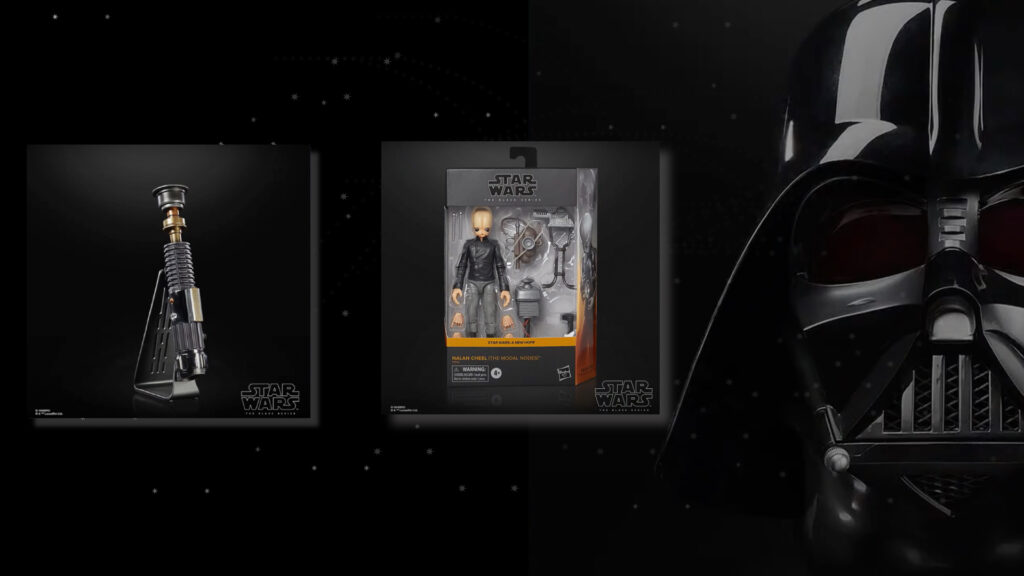 In Hasbro Pulse’s 2022 Star Wars May the 4th Be With You Livestream, a new wave of Star Wars – The Black Series collectibles has been announced. A few long-awaited figures are being included in the wave, most notably some sought after members of the famous cantina band The Modal Nodes. Announced figures in the 6″ scale lineup include Figrin D’an, Nalan Cheel (both as featured in A New Hope), New Republic Security Droid (The Mandalorian), and 187th Battalion Clone Trooper (Clone Wars).

In addition to the 6 inch figure line, Hasbro revealed some exciting premium items as well. The first 1:1 scale item revealed was a revision to the Black Series Darth Vader helmet. The updated version of this fully wearable helmet includes Vader’s classic red eye lenses, electronic sound effects, an updated sculpt, and a 3-piece magnetic assembly. The Hasbro team claims that this is their most screen-accurate realization of the helmet thus far.

As a finale to the livestream event, Hasbro Pulse revealed a look at a brand new premium Obi-Wan Kenobi lightsaber. The lightsaber features detailing from the new show, a removable blade with adjustable LEDs, a display stand, a swappable display emitter, and is capable of dynamic sound/lighting effects such as clashing and blaster deflection. The team also discussed a new “battle sequence” feature which allows the saber to sync its effects with others in the series for a realistic battle display.

The new batch of Star Wars – The Black Series 6 inch figures are slated to release in the Fall season of 2022, while the premium Darth Vader Helmet and Obi-Wan Kenobi lightsaber are scheduled for release in the Spring 2023 window.