How the multimedia project was needed during the Star Wars drought 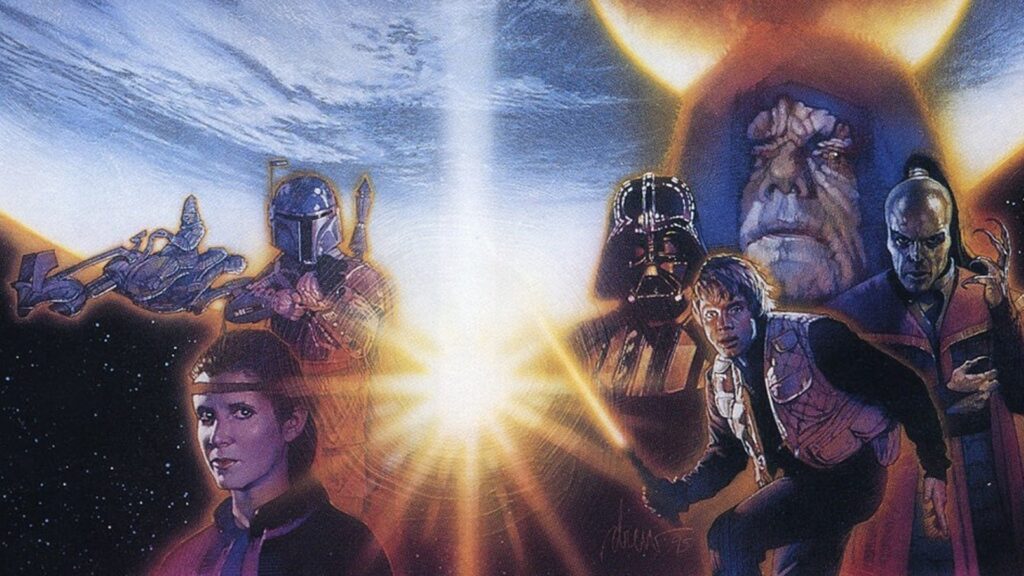 On this Star Wars Day, let us hearken back to an earlier time in Star Wars history.

In 1996, the Star Wars franchise saw the release of something truly special.  Before The Phantom Menace or even the Special Editions, Lucasfilm had a multimedia project in the works, the likes of which hadn’t yet been seen by the fans.  And, yes, while it was meant to whip up interest ahead of the theatrical release of the Original Trilogy, it became something of a cultural icon in and of itself.

The Shadows of the Empire was an epic telling of what otherwise seemed a simple side-story.  Taking place between The Empire Strikes Back and The Return of the Jedi, it follows Luke, Leia, Lando, and the gang, while introducing a new protagonist – a smuggler and mercenary by the name of Dash Rendar – while they tried to hunt down Boba Fett and liberate the carbonite-frozen Han Solo. We see the Emperor.  We see Vader.  We meet a new villain as well: Xizor, Falleen Prince, and the head of the crime syndicate Black Sun.  He’s ruthless, cunning, and happens to have the ear of the Emperor himself. There are speeder bike chases, and political turmoil, and the story culminates in a climactic space battle over Coruscant as the Republic, the Empire, and the Black Sun fight in a three-way battle.

The story in its near entirety can be found within the novel written by Steve Perry, but what’s a true multimedia project if you can experience everything intended for you to experience from just one source? There was a comic series.  There were trading cards.  There were action figures and toy starships.  There was even a fully orchestrated soundtrack!  Perhaps, however, the most memorable aspect of this project, at least for pre-teen kids like myself at the time, was The Shadows of the Empire video game.

It was an experience in and of itself.  Snapping that cartridge into my Nintendo 64, booting it up to the nostalgic sight of the Lucasarts logo, the blare of horns as the words “STAR WARS” scrolled across my screen, and you mean to tell me it wasn’t a movie?  Mindblowing stuff. Of course, the graphics are nothing to call home about by today’s standards, but everything the game threw at me, clunky controls and all, was enough to keep me hooked all the way through.

I was able to experience The Battle of Hoth hands-on for the first time outside of watching it in The Empire Strikes Back.  Picking up a blaster as Dash Rendar and shooting stormtroopers, war droids, AT-STs, even a giant diagona, gave me a sense of thrill and immersion into the Star Wars world that the films themselves couldn’t do.  And when the game thrust me into the cockpit of Rendar’s ship, the Outrider, I was able to engage in actual starship dogfights for the first time.  Games like Star Wars: X-Wing and Star Wars: TIE Fighter already existed for the PC, true, but for a Nintendo kid such as myself (and many others), this was a new and exciting experience.

After completing the game, I ate up the novel as soon as I could get my grubby hands on it.  It filled in much of the blanks I otherwise wasn’t aware of in my playthrough, conveying infinite more detail to the story and fleshing out scenes and characters.  Of course, the two experiences, while separate, were linked together as only a multimedia project could do. It was in the book that I discovered new Star Wars terminology I hadn’t otherwise heard. Like Heir to the Empire did previously, it name-dropped Coruscant – also called the Imperial City – three years before The Phantom Menace introduced it to wider audiences.  It also gave me inside into how Luke crafted the green lightsaber he wielded in Return of the Jedi, forging his very own “blade crystal” (this was before the term “kyber crystal” came into being).

As part of the Shadows project, Dark Horse Comics is a six-issue miniseries that further expanded the story. While there was very little from the perspective of Leia, Lando, and Chewie, it instead focused its narrative on the bounty hunter Boba Fett in his attempt to bring the frozen Han Solo to Jabba the Hutt. We also see the tension between Xizor and Darth Vader, their mutual hatred of each other under the surface level of trying to appease the Emperor currying favorites.

To round off the experience, on one of my many trips to a Hastings Entertainment store – a fine purveyor of music, videos, and comics (may it rest in peace) – I was surprised to see that Shadows had its very own soundtrack. And not just a rip of cheap-sounding game MIDIs either, but a fully orchestrated score! Composed by Joel Mcneely and performed by the Royal Scottish National Orchestra, it was 51 minutes of finely tuned music inspired by the novel, with themes dedicated to various events or even people. Within this soundtrack, we can hear slices of John Williams’s eternally beloved scoring, but McNeely took it a step further and gave us his own twist to the Star Wars musical universe, including the very first rendition of the Dha Werda Verda poem and the Mando’a language. I listened to it almost every day for a good, long while.

The Shadows of the Empire opened my mind to there being so much more to Star Wars than just three films. As I searched for more material tied to the game and novel, I soon found all sorts of reading material for the fandom at large. The Thrawn Trilogy, The Truce at Bakura, Dark Apprentice, and so, so much more was there, ready to be consumed by a young and very exciting mind. The Essential Guides series, dedicated to thoroughly covering topics like characters and vessels – well before Wookieepedia existed – gave my growing knowledge of the Star Wars universe much-needed visualization and structure.

What we were given in this multimedia event was truly something special for its time.  At the tail end of a thirteen-year theatrical drought of Star Wars, in a time of uncertainty and cautious optimism knowing the Prequels were on the horizon, we were graced with a story – an experience – that scratched a much-needed itch that we didn’t even know we had.