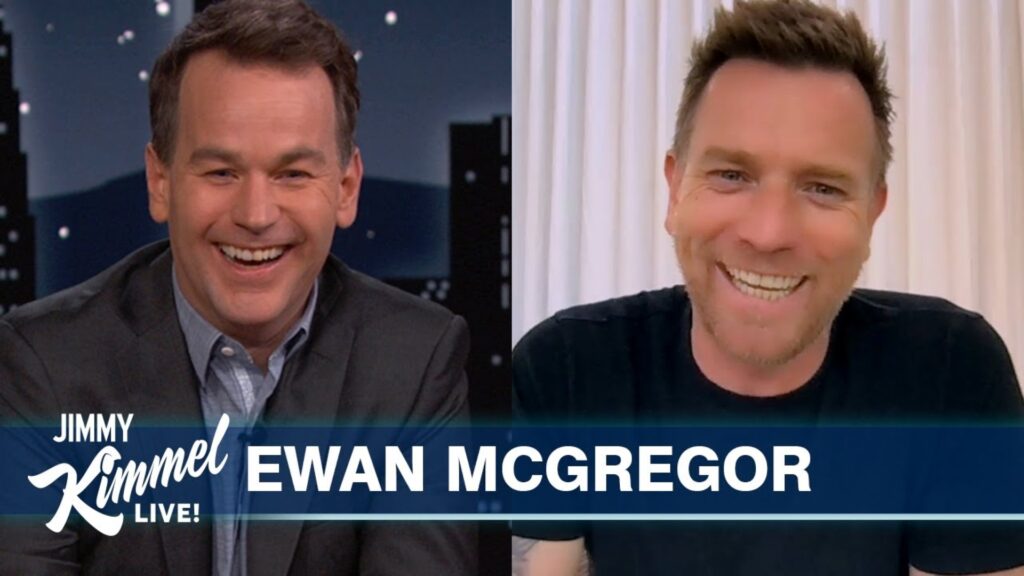 The moment has finally arrived. We can finally enjoy a Star Wars-focused interview with Ewan McGregor after years of the actor downplaying his involvement in Star Wars again.

On May the 4th, the Obi-Wan Kenobi actor appeared on Jimmy Kimmel Live! and spoke with guest host Mike Birbiglia about the new series. He was initially questioned on the massive amount of Star Wars material they must study in order to avoid contradicting what happened in previous projects. While Ewan isn’t completely up to date on all the canonical elements, series director Deborah Chow is:

“Luckily on this series we had Deborah Chow, who is our amazing director, and she really knows across all… Because now Star Wars has become… it’s the movies but it’s also TV shows, it’s computer games, cartoon, books, comics… And all of the storylines have to match up, you can’t have some fact in the video game that doesn’t match up to the movie. She was amazing at knowing all of that stuff and guiding the writers as well with that.”

Denis Lawson, Ewan McGregor’s uncle, played Wedge Antilles in the original Star Wars trilogy, Birbiglia recalled. McGregor recounted his enthusiasm as a child when he went to see Star Wars in the theater because his uncle was in the film:

“I remember standing outside the school with my brother, I was five or six, and my mom and dad picked us up and they were taking us to the big city to watch a movie that my uncle Denis was in. And so we went and we were so excited to go and see, you know, your uncle in a movie. And then we sat there and it was Star Wars! And it blew our minds away.

So he played a character named Wedge Antilles, and he survived all three of the original Star Wars movies. [As Birbiglia pulls up a picture of Wedge] There he is, Wedge! ‘Look at the size of that thing!’ That’s my uncle Denis, and he’s doing a musical at Great Britain at the moment, he’s touring around and they’re going to be in the Barbican [Centre]. Anything Goes [is titled].”

The actor went on to say how his uncle continues to inspire his work today:

“He’s a song-and-dance man, and he’s always been my uncle hero. If I’ve ever got like stuck at work, he’s the only person I’d ever phone and ask, you know, to get acting advice from. And I’m very like him, I see bits of him in my work all the time. I call him, actually, from set sometimes, and I go ‘Den, I totally did you again today!’ After about 10 years or 15 years of doing this he called me one day and he said ‘Ewan, I [expletive] did you today!’ [Laughs]”

Although he couldn’t say much about Obi-Wan Kenobi, he did explain how his character starts off and what inspires the downcast Jedi to inspire hope in the galaxy:

“Well, it’s ten years after the events of Episode III. I always thought that there must be a great story in between the last Episode I made and Alec Guiness in Episode IV: A New Hope. And I was right, we found a really good story to tell in that timeframe.

“So it’s ten years after the end of Episode III, the Jedi Order’s all been destroyed, and everyone else who wasn’t destroyed by Order 66 is in hiding. And Obi-Wan is carrying the guilt of having failed Anakin and lost Anakin to the Dark Side. So he’s a bit of a mess, he’s at a very low point. He’s sort of being in hiding, he’s not being a Jedi, he’s pretty bleak-minded. And then something happens, and he has to decide to help someone do something or not… That’s the series.”

Lastly, Ewan also had the opportunity to advertise Obi-Wan Kenobi’s brand-new Black Series figure. The figurine, which is based on his character in the upcoming series, will be available for pre-order on May 11 through Hasbro Pulse and other major retailers.

Check out the figure below:

The first two episodes of Obi-Wan Kenobi premiere on Disney+ on May 27. If you’d like, you can watch the entirety of Ewan’s interview below: