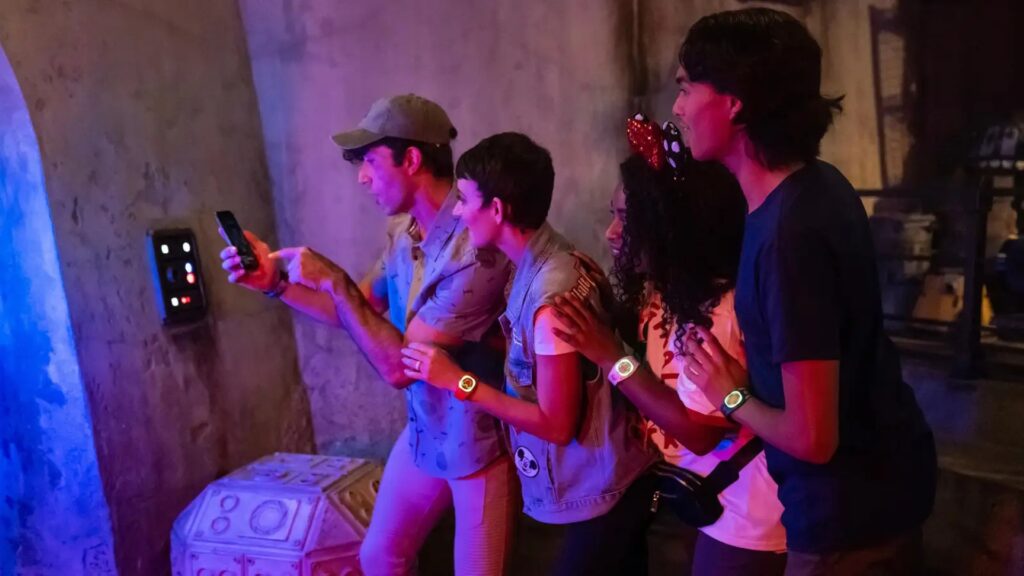 “Now if you’ve ever played Warmer-Colder as a kid, it’s basically the same idea here.”

This new game, dubbed Batuu Bounty Hunters, will allow guests to use their improved MagicBands to track down bounties concealed throughout Black Spire Outpost and see how close or distant they are from their target. Using a wristband and a phone, park visitors will be able to use a thermal scanner to tag bounties placed behind doors and then receive credits as a reward.

While interactive games are not new to Batuu Outpost, this will be the first time guests may use MagicBands to further immerse themselves in the land’s living story.

Batuu Bounty Hunters allow players to gain credits by playing as a First Order or Resistance sympathizer or a smuggler in order to participate in the galactic struggle. At the end of the day, based on who has had the greatest impact on the land, one side or the other will win.

MagicBand+ wristbands will be used to play the entire game. Previously, the original MagicBand gadgets were previously utilized exclusively for making purchases, accessing the parks, and unlocking your resort hotel room. Beyond the Batuu Bounty Hunters game, these enhanced wristbands function with the PhotoPass system, Lightning Lane, and even glow and light up in rhythm with some of the parks’ nightly performances.

What other interactive experiences with MagicBand+ would you like to see at Galaxy’s Edge? Let us know in the comments below!