Every Major ‘Star Wars’ Announcement From Vanity Fair This Week 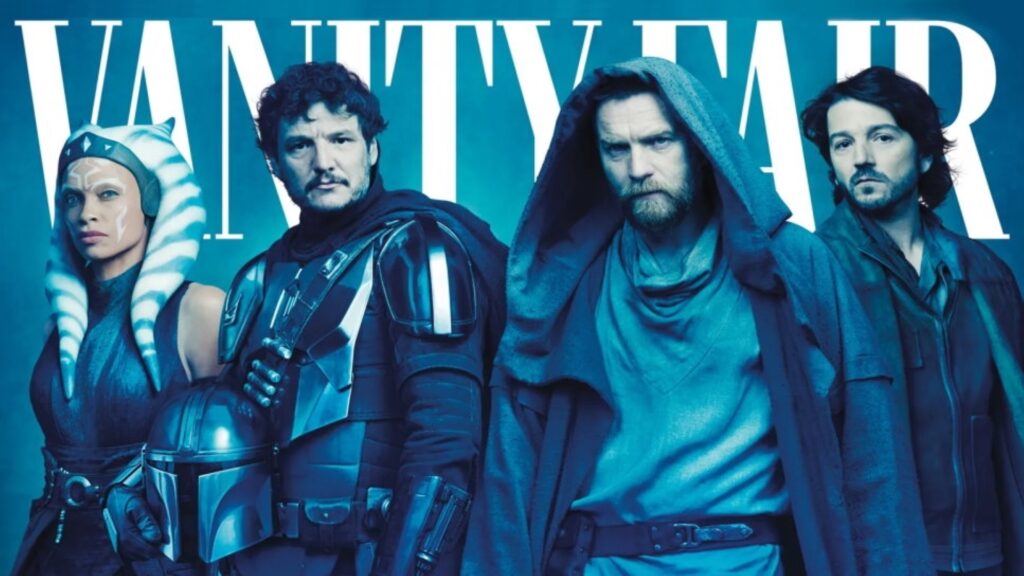 The 2020s is the decade for Star Wars! A slew of news of the galaxy far, far away was released recently by Vanity Fair and it absolutely has the internet on fire for what’s to come. Let’s break it all down!

With Obi-Wan Kenobi dropping at the end of the month, Mandalorian Season 3 wrapped up filming, Ahsoka beginning its production, and Andor set to release later this year, the current slate for Lucasfilm is filled with a plethora of TV shows setting up different aspects of the Skywalker Saga. In turn, it’s leaving fans absolutely excited for the future of Star Wars!

Most notably is of course the keeper of the high ground, Jedi Master Obi-Wan Kenobi, and his epic tale is set to release on May 27 on Disney+. As we saw originally in the Original Trilogy older man Ben Kenobi had an ever so watchful eye on the son of fallen Jedi Anakin Skywalker, Luke. This story takes place 10 years after the painful events of Order 66 which led to the fall of the Galactic Republic. As Emperor Palpatine established the Galactic Empire, which ushered in a slew of tremendous horrors across the galaxy. One is the Jedi hunters known as Inquisitors.

The exciting trailer shows three Inquisitors hunting Obi-Wan: Rupert Friend as the Grand Inquisitor, Moses Ingram as Reva or Third Sister, and Sung Kang as Fifth Brother. With the hype surrounding the overzealous Inquisitorius, we can safely assume that Mandalorian director Deborah Chow is going to deliver quite a show, especially with the long-awaited “Return of the King” as fans have come to call Hayden Christensen, returning as Darth Vader. Also, the series showcases the return of Joel Edgerton who was originally featured as Owen Lars in George Lucas’ 2002 Star Wars: Episode II: Attack of the Clones.

When George Lucas had seemingly concluded his live-action films with Star Wars: Episode III: Revenge of the Sith fans sat patiently waiting for any news about a continuation of Kenobi’s story, especially with how the film ended with Yoda hinting at the return of Obi-Wan’s former master Qui-Gon Jinn. Years later, John Jackson Miller’s novel Kenobi was released. However, no such idea was spawned under George’s ownership of Lucasfilm. It wasn’t until after the deal with Disney that the idea wheel began to spin. And with Dave Filoni as the executive creator role at Lucasfilm, fans were excited to hear what the possibilities were.

The way The Mandalorian Season 2 ended (what feels like ages ago) with such a cliffhanger, fans are anxiously waiting for some great theorized reveals from Mandalore; Din and Bo-Katan having a battle for the dark saber, and some familiar faces from the TV series Star Wars Rebels. Because of Vanity Fair, we now know that The Mandalorian Season 3 is being eyed for a late 2022 or early 2023 release with some familiar faces from Season 2 set to return.

Next up is Mexican actor Diego Luna who was cast as Captain Cassian Andor in Star Wars: Rogue One. His upcoming series Andor was announced during the 2020 Disney Q3 investor conference. The show is set to release later this Summer with 12 episodes depicting an unseen era of the imperial controlled galaxy, five years before Rogue One.

As Rogue One showed us, there is a darker and broodier side to the Rebellion that heroes of the resistance care to mention (Mon Mothma). The Rebellion tends to walk the fine line between being better than the Empire and stooping to the blatant terroristic methods of Saw Guerrera while still maintaining the cloak and dagger espionage-type story of the early Rebellion.

This show has Diego playing some sort of real-life secret agent as his lack of trust in others is disturbing. Sitting in traffic, Luna had zero trust in his driver or anyone for that matter, “That was just my paranoia,” said Diego. He describes it now as “not connected to reality.” His experience of hiding his involvement in Star Wars is but a small peek into the world that Lucasfilm creates in establishing a zero leak policy. Diego would avoid any type of conversation that included the words star and wars. “I was speaking in code because I was trying not to say too much in the car.” I’d say that’s Andor living vicariously through Diego.

Everyone loves the Force-sensitive Togrut, including Dave Filoni. Starring Rosario Dawson as Ahsoka Tano, show creator and writer Dave Filoni has been rumored to be finishing the story he started years ago with Star Wars Rebels. Once more, it seems that fans won’t need to wait that long as it’s now been confirmed that Ahsoka will arrive in 2023. Although plot details are being kept under lock and key, Filoni gave us a brief insight into the show’s storyline.

“Ahsoka is a continuous story,” Filoni explains. “It is definitely driving toward a goal, in my mind, as opposed to being little singular adventures. That’s what I want the character to be doing, and I think that’s what fans want now. They have such a relationship with her. I’ve only recently started to understand that all those kids that watched Clone Wars are now a lot older—they’re very excited about all the things they grew up with, as they should be.”

Back in 2017, it was announced that Star Wars: The Last Jedi director Rian Johnson had secured his own Star Wars trilogy, despite the massive fallout caused by his film. Kathleen Kennedy recently stated that Rian’s trilogy has not been canceled but rather effectively been placed on the “back burner” as he was extremely preoccupied with his Knives Out films and Netflix deal, implying that Johnson would in fact later return to his trilogy at a later date. Sadly, this delay has left fans more divided than ever on the subject of whether Rian should direct another Star Wars film, let alone an entire trilogy.

His staunch supporters have shown just how much The Last Jedi meant to them as fans while the more original fans have stated their frustrations with having their “expectations subverted,” as Rian once put it. Inevitably, we’ll be waiting to see what news turns up regarding Johnson’s trilogy as doubts rise about it ever happening.

As we have seen, Lucasfilm has been taking advantage of the popular Mandoverse or Filoniverse as fans have come to call Dave’s universe of shows and characters while Kathleen confirms Rian’s trilogy isn’t in active status anymore. Did Lucasfilm take notes from the controversial sequel trilogy? Hard to say, but only Kathleen knows.

The Acolyte will explore a very exciting era that’s never been seen before on screen. Announced in 2020, the show is set 100 years before the Star Wars: Episode I: The Phantom Menace, which is before the Skywalker Saga, and at the end of the High Republic era. Director Lesley Headland is essentially directing a show where the Sith are attempting to reform their evil society while hiding from the Jedi.

“A lot of those characters haven’t even been born yet. We’re taking a look at the political and personal and spiritual things that came up in a time period that we don’t know much about. My question when watching The Phantom Menace was always like, ‘Well, how did things get to this point?’ How did we get to a point where a Sith lord can infiltrate the Senate and none of the Jedi pick up on it? Like, what went wrong? What are the scenarios that led us to this moment?”

With the writing already finished and casting underway, Lesley stated that the show is a mystery thriller in a period called the “Age of Enlightenment” where the Jedi Order became withdrawn from galactical issues and essentially removed themselves from affairs that didn’t benefit them.

“We actually use the term the Renaissance, or the Age of Enlightenment. The Jedi uniforms are gold and white, and it’s almost like they would never get dirty. They would never be out and about. The idea is that they could have these types of uniforms because that’s how little they’re getting into skirmishes.”

While the era of the High Republic is currently underway with comics and novels written by authors like Cavan Scott, Charles Soule, and Claudia Grey, we are already seeing the tail end of the era coming to a close with The Acolyte series arriving on Disney+ in 2023.

Vanity Fair has an amazing update on the new Star Wars Disney+ show from Jon Watts, who directed Spider-Man: No Way Home and is working on Grammar Rodeo, his unofficial project title for the show.

The show, which will take place after Return of the Jedi in the post-original/pre-sequel trilogy era, has issued a casting call for four young actors aged 11 to 12. The Star Wars show will be inspired by Steven Spielberg’s Amblin Entertainment’s famous ’80s coming-of-age adventures.

Watts will act as the project’s creator and executive producer, with Spider-Man: Homecoming writer Chris Ford writing the script.

Kathleen Kennedy, President of Lucasfilm, discussed the studio’s plans for Star Wars theatrical releases and approach to the series.

According to Vanity Fair, Taika Waititi and Krysty Wilson-Cairns’ Star Wars film could arrive before Patty Jenkins’ Rogue Squadron, with Kennedy adding that they “have a road map” at Lucasfilm.

So far, we know that Rogue Squadron will not be based on the games and books of the same and will tell its own tale of “a new generation of starfighter pilots as they earn their wings and risk their lives in a boundary-pushing, high-speed thrill-ride.”

On the other hand, Waititi’s film seems to be more secretive. However, due to the presentation introducing the project including a strange item that resembled a Tho Yor ship, something heavily featured in the Dawn of the Jedi book series, some have speculated that it may cover the extremely distant past of the Star Wars galaxy. And so far, it’s heavily rumored that his film will release in 2023.

Kennedy tried to act as though Marvel Studios producer Kevin Feige’s standalone Star Wars project isn’t officially on the table, despite years of reports to the contrary and confirmation from many sources (like writer Michael Waldron) that it is in the works:

“I would love to see what movie he might come up with, but right now, no, there isn’t anything specifically.”

Does this mean that it won’t release? Absolutely not! Most likely, producer Kevin Feige has yet to pitch the film to Kathleen and is waiting on a script draft from Loki writer Michael Waldron. Once completed, I’m sure we’ll start to hear A LOT more about this project. So far, rumors have suggested that it will release in 2027, the empty film slot reserved for an upcoming Star Wars film.

THAT WAS A LOT!

If you think that was a lot, just wait for Star Wars Celebration next week! In the meantime, we have plenty of Star Wars content to keep us busy while we patiently wait for more news regarding all of these upcoming shows and films.