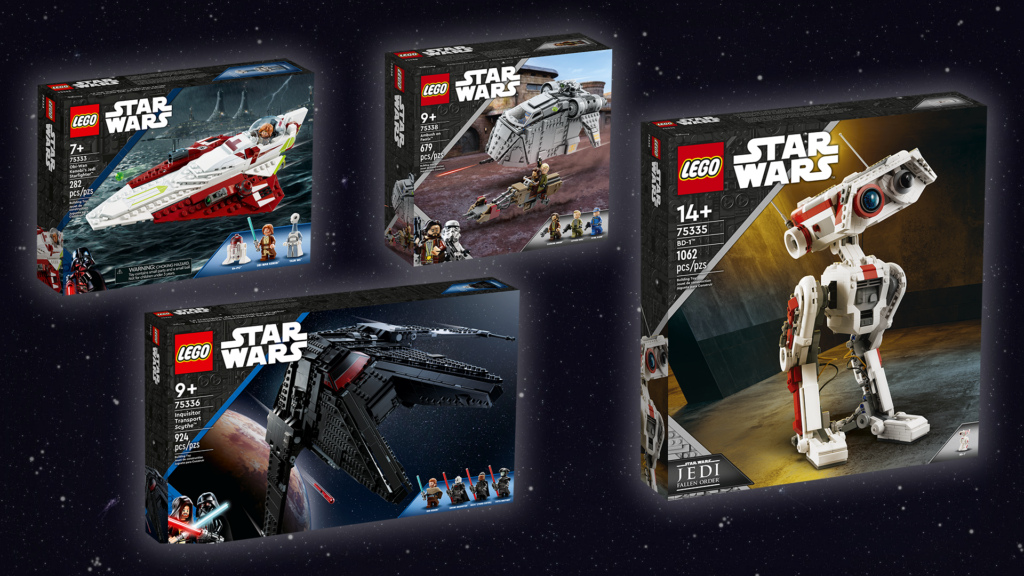 Throughout the week, the LEGO group has revealed some of its summer 2022 sets. The line-up includes a variety of sets from different Star Wars content including Attack of the Clones, Obi-Wan Kenobi, Andor, and Jedi: Fallen Order.

Although many of the sets were revealed this week, the remainder of the summer wave will most likely be revealed during LEGO Con on June 18th.

Celebrating the 20th anniversary of Attack of the Clones, the LEGO group is releasing a new iteration of Obi-Wan’s starfighter. The set will include the first Kaminoan minifigure of Taun We, which is long overdue.

Following the release of last year’s Imperial Probe Droid, the next buildable character will be BD-1 based on Jedi: Fallen Order. The main play features include an articulated head and legs, as well as a hidden compartment in the droid’s head with health stims.

One of the more impressive reveals from this week was the Inquisitor Transport Scythe from the Obi-Wan Kenobi Disney+ series. The set includes the three main Inquisitors from the series, in addition to Obi-Wan, who is appropriately listed as “Ben Kenobi” on the box.

Eagle-eyed Star Wars fans will recognize the Mobile Tac-Pod from the Andor trailer. The LEGO designers mentioned that the set is based on an intense speeder chase from the upcoming Disney+ series. The set also revealed the name of Stellan Skarsgård’s character, Luthen Rael.

The panel gave us a small glimpse at this year’s advent calendar. The reveal included a beach-themed Darth Vader minifigure, with a mini-build of a sandcastle. The sandcastle is modeled after the sith lord’s castle on Mustafar, which is ironic given Anakin’s disdain towards sand in the prequels. The LEGO designer teased that the rest of the advent calendar would be revealed at a later time.

In addition to the set reveals, the panel also featured a new animated short celebrating the 45th anniversary of Star Wars: A New Hope. The short gave us our first look at the Omega minifigure, which will be included in 75323 The Justifier based on The Bad Batch.

The panel concluded with the reveal of an upcoming Disney+ special titled, LEGO Star Wars Summer Vacation. The special will feature the sequel trilogy heroes as they take a summer vacation aboard the Halcyon Starcruiser following the defeat of the Emperor in The Rise of Skywalker.

Lucasfilm released a poster for the special, which is shown below. LEGO Star Wars Summer Vacation will be available for streaming on Disney+ starting on August 5th.