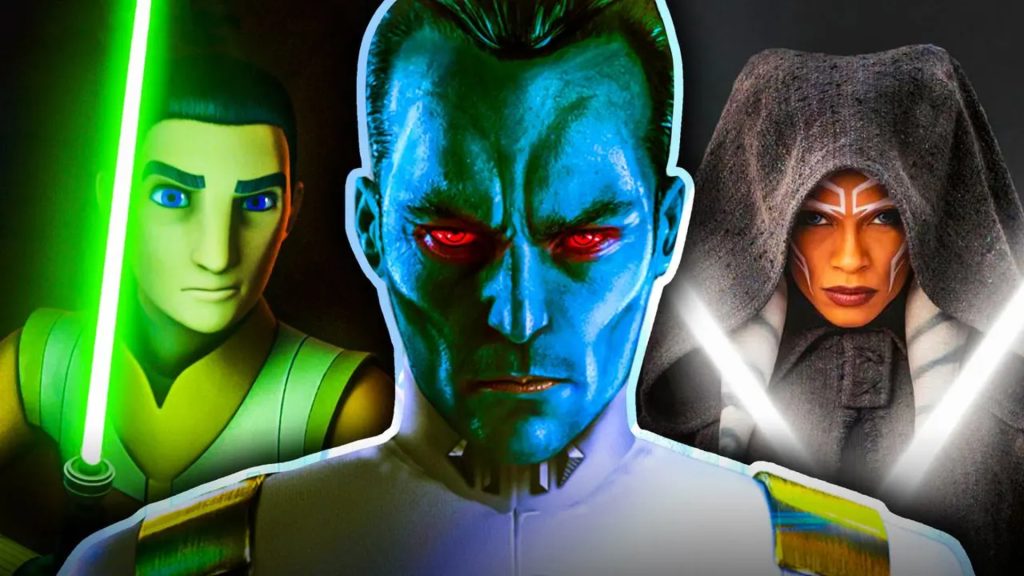 As expected, it seems that Ahsoka Tano is on pursuit to find Grand Admiral Thrawn in Disney+ upcoming show, Ahsoka. Last seen in Star Wars: Rebels, he being dragged into hyperspace along with Ezra Bridger near the end of show. First seen in The Mandalorian in Season 2 episode 2, “Chapter 13: The Jedi,” Ahsoka fights Elsbeth, a former imperial agent, and demands she divulge the location of Thrawn.

As the whereabouts of Thrawn still seem to be on the minds of the audience, they eagerly asked Dawson at the C2E2 conference about it. The actress shared how the villain’s place within the series will be prominent considering how he was left off in Rebels.

Joking about Thrawn being “‘incognito” and calls upon a multiversal ally, Scarlet Witch, for assistance to aid in her quest, “That dude, man…incognito. Maybe we get the Scarlet Witch to help us, she can jump through Multiverses, right? Let’s go, girl! Yeah, I mean, that’s a really big key kind of giveaway in Mando about what my show could potentially be about. Obviously, we are really trying to track [Thrawn] down, so we’ll see what happens…“

Given that Thrawn was created in the old Star Wars Expanded Universe, he was a cunning villain of a trilogy of novels, beginning with Heir to Empire, taking place after Return of the Jedi. Timothy Zahn, the author of the trilogy, helped create a new cornerstone of the growth of the Expanded Universe throughout the 1990s to about when Disney purchased Lucasfilm. Alongside Darth Vader and Emperor Palpatine, Thrawn is deemed as a key villain in the Star Wars universe because of his masterful intelligence as a tactician.

In searching for Thrawn, Ahsoka is also searching for Ezra Bridger, who saved Ahsoka before Thrawn and Ezra were sucked into hyperspace. In hopes of finding Thrawn, she would also find Ezra, yet the audience wonders if Ezra will be revealed and the two will reunite in the live-action series.

So little is known about the filming process of Ahsoka except that the filming began this past May and will release sometime in 2023. Time will tell with who is cast as Thrawn, how Thrawn will be utilized in the show, and – hopefully! – Ezra’s whereabouts.