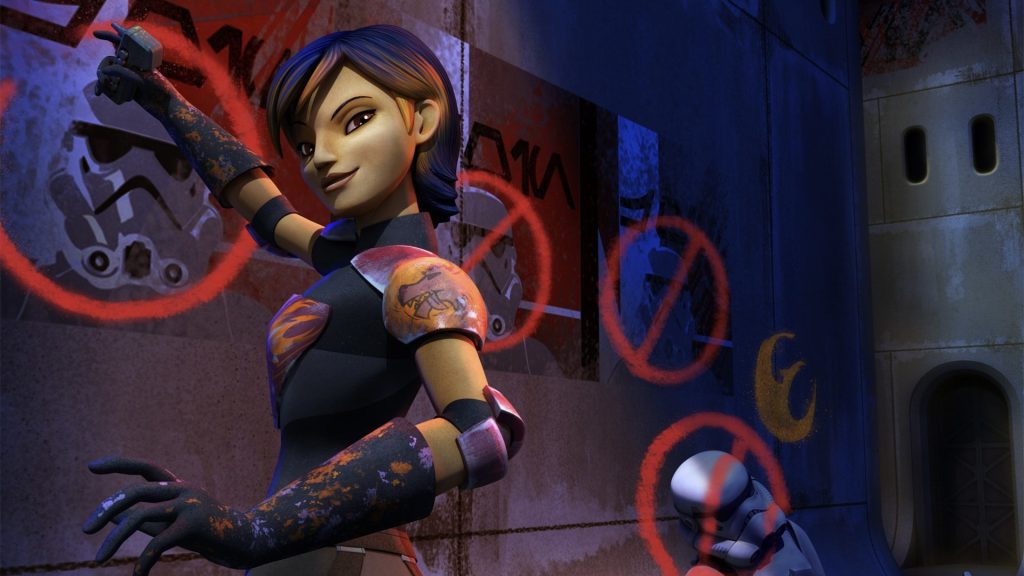 With Sabine Wren appearing in the new Disney+ series, Ahsoka, Dave Filoni praises actress, Natasha Liu Bordizzo her work ethic and perfect fit for the role. As both animated characters from Star Wars: The Clone Wars and Star Wars: Rebels come to the live-action screen, Filoni opens up on how much he wanted Sabine to stand out against the rest of the Star Wars characters in the universe.

In Entertainment Weekly’s podcast, Dagobah Dispatch Podcast, Filoni discusses how he will set up her and Ahsoka’s character to attend more adventures together:

“Boy, I mean, I love the characters that I’ve been a part of telling their story over the years and Sabine really stood out. She was a different character at the time that we did her. I wanted her to be a lot more colorful than people’d seen Star Wars characters [be], you know, dying her hair, changing it constantly. But I was really convinced that, you know, I was looking at the way kids are now and how they need a character of their own, as much as George [Lucas] looked at my generation when I was little and found things that I could relate to through Luke’s journey. So, I had set it up at the end of Star Wars: Rebels in a lot of ways, that there was a further story to do with Ahsoka and Sabine. “

In terms of casting decisions, Filoni and Favreau share how they both unanimously wanted Bordizzo to play the role, and in addition, Favreau praises Marvel and Star Wars casting director Sarah Halley Finn for her help in on a more individualized basis in choosing the right actress to play Sabine:

“And so, just finding the right way to tell that story, the best way to tell that story, something that was creatively challenging for myself. And then in live-action, finding the person to perform that character… Natasha [Liu Bordizzo] just, it’s funny, Jon and I, we look at these things separately, which is always interesting, when we do the casting. And then we come together and we usually come together with the names, and we say, ‘Well, this person and this person.’ And I would say almost without fail, we’re always on the same person. It’s really fascinating. That’s our easiest barometer. That’s how we do it.”

Bordizzo’s and Filoni’s excitement about their roles is contagious as they both are thrilled to see what Sabine Wren will bring in the show with Bordizzo as the actress. With the stellar impressions that she made on Filoni, Finn, and Favreau, there is no doubt that she will excel in her role and surpass as a new-found and strong heroine.